Or maybe it’s sister/brother (I haven’t decided a gender for Book III yet). 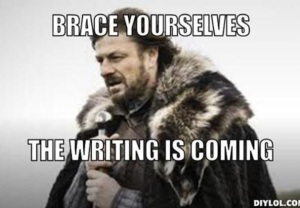 After having the Shadow Trilogy rattling around in my brain for nearly a decade, I set out this past weekend to tie up loose ends. That’s right, guys: Book III is officially underway! Most of you know how I like to make a big deal out of everything and turn it into a memorable event, so I just sat there for a full five minutes, watching that little line blink on and off on the clean slate that was the brand new Word doc. And I just let it sink in that the next word I wrote would be the last first word I would ever write in this series.

The beginning of the end.

Okay, okay, it sounds super dramatic that way, but it’s the truth. While I have a caravan full of other stories plotted out and half-written, and also random ideas that I want to bring to life, it’s still hard to accept that after this series, I’ll never really get to hang out with these characters again.

For an author, starting the final installment in a trilogy is like having your kid graduate from high school—they haven’t gone off to college yet, but it’s only a matter of time—or setting your feet on the moon for the first time. OR like tasting your one and only first bite of Talenti ice cream. You’ll never be able to go back and experience the tantalizing flavors of Mediterranean Mint, Sea Salt Caramel, Chocolate Peanut Butter Cup, or Cappuccino (trust me, you’re missing out). Unless, of course, I’m successful in creating a time machine and can travel back simply for the purpose of eating and experiencing history. You’re welcome for that. 😉

So going back to what I was actually talking about before (writing, remember?). It’s either extremely exciting or totally terrifying to begin a new story, but for me it’s always a little bit of both. I’m not sure if it’s fear that I won’t be able to do the story justice, but all I know is that it feels a little like going on a first date, or so I’ve heard (all the single ladies, woot-woot!): Is the opener/introduction good enough to keep them interested? Haha. I know, I’m full of weird analogies today, but they’re all totally appropriate.

I did it anyway, though. I typed those first two lines, and then another four . . . then a page, and by the time I was done—and only because I had to go to work and get real pants on—I had the entire prologue finished, another scene typed up, and several chapters plotted out. EEE! I can’t tell you how good it felt to once again have new ideas pouring from my fingertips, my mind working faster than they could type. I don’t think I’ve ever had totally new and unexpected ideas and scenes come to me so quickly. In that hour before work, I explained Cadius’ motives for—well, I guess you’ll find that out in “Chasing Shadows” ;-P—why Ridlan, the surrounding province, will play such a significant part in the series, how time travel is really going to mess things up, why the professor was betrayed, and also how Karen’s parents were murdered. It was like an onslaught of awesome!

Soon, I’ll be releasing quotes/excerpts from “Chasing Shadows,” doing a final, final cover reveal once it’s sized, and also releasing the official map of Serimone, thanks to the amazing Roan Carter, who illustrated the cover. But you guys are just as important to the success of this series as my writing is, even more so because you guys help to get the word out about “Chasing Shadows.” I have some signing events, activities, meet and greets, and the like over the next few months, and I would love for you all to help spread the word when I post event info. You can Tweet, Pin, like/share on Facebook, follow, become a fan on Goodreads via the link on the sidebar, blog, or use word of mouth to share anything pertaining to the series. Or if you have any creative ideas for promotions that I can add to my bag of tricks, let me know!

I have a few ideas for a title that I have up my sleeve, but I can’t reveal them quite yet. If you’re interested in contributing your input, though, please send me an email with possible titles (containing the word “Shadows”) for the final installment in the Shadow Trilogy. And I’m still accepting review and interview submissions. If you want to host me on your blog and review “Chasing Shadows,” or if you’re an author who would like for me to interview them, let me know at ashleytownsend.author@yahoo.com