November is a time of family, autumn leaves, snuggly clothing (I live in San Diego, so . . . . I basically never get to wear my sweaters *cries*), thankfulness, an obsession with the PSL (I had to ask someone—apparently, it’s lingo for Pumpkin Spice Latte *shrugs*). Seems pretty quaint, right?

Well, for writers the month of November is basically a crazed adventure film where people who live a thousand lives and imagine the impossible embark on a journey to the Great Mount Fifty (also know as Mordor). You either make it or die trying. *dramatic music swells*

Don’t know what I’m talking about?

IT’S NANOWRIMO, PEOPLE! A month where authors take on the task of reaching 50,000 words in their work in progress in a meager 30 days. Why not a month that has 31 days to it? . . . . I honestly don’t know, because when you’re strapped to the seemingly innocent task of at least 1,666 words per day, even a few hours can be helpful.

And everyone knows that epic movies and adventures require the proper soundtrack for inspiration. Do you think Captain Ahab wasn’t humming some Journey power-ballad to himself when he attempted to slay Moby Dick, or that literary greats didn’t bob their heads to some intense Mozart tune while penning their poetry? Or that any Marvel film would be as exciting without a score or AC/DC number to guide the scene on?

Negatory, my friends. “Where words fail, music speaks.” Thank you, Hans Christian Andersen. Some of my greatest blocks while writing the Rising Shadows trilogy were overcome by the right tune that sparked my inspiration and set the mood for the scene, unblocking me like some good ol’ Drano for the mind. . . . I think I took it too far.

Anyway, below is my playlist that helped me work past today’s word count goals for The Jungle Princess. It’s basically a compilation of songs that I just love listening to and put me in a great mood to write, but some also fit seamlessly as the inspiration for current chapters in JP. So, this begs the question, what’s on your writing playlist? What music inspires you? Are you hooked by lyrics, the melody, or both? Or are you like me and listen to the same song on repeat for hours until the scene comes together perfectly? Cheers to that! *clanks mugs of coffee, because caffeine means survival*

“On My Way Back Home” – Band of Horses

“Back on the Map” – Kacey Musgraves

“Don’t You (Forget about Me)” – Simple Minds

I was lucky enough to be a beta reader for “A Time to die,” Book I in the Out of Time series by dystopian author Nadine Brandes, and have been salivating for the sequel ever since! Nadine and I have only met a few times, but we’ve honestly bonded for life over fellow author struggles and fangirling/lamenting over the same books (“Mockingjay” can burn in the fiery pits of Mordor!!!) And when the cover came out for “A Time to Speak,” I was just #deadonthefloor #dyingoffeels #OhTheHumanity #MyPrecious #NewPatronus

So when Nadine asked if I would like to be part of her team announcing the arrival of the cover of “A Time to Speak,” I was eee-lated! I love supporting fellow authors and friends, and let me tell you, knowing Nadine as a person and writer and inspiration, this book. Will. Not. Disappoint. . . . If I survive the emotional turmoil. 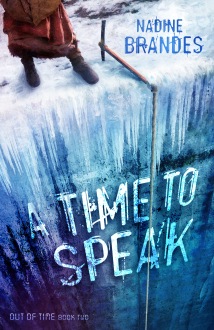 The feeeeeels!!!! The cover is fantastic and intriguing, no? *wiggles eyebrows* Okay, now to the interview.

Nadine, let’s kick things off by telling us a little bit about your upcoming release “A Time to Speak” *fangirl squeal*.

Was there a defining moment that made you decide to become a writer?
Frankly, I was just born with a blank book for a brain. Thankfully God gave me a love for words, so I was able to scribble on that book and fill it up. 😛 But I really got serious about writing when I was in college – that’s when I decided to write for publication instead of just for myself.

I’ve noticed you prefer to write YA—a girl after my own heart—but is there a specific reason that you favor this genre and are there any subgenres that you connect to as a writer?
I like the YA genre for many reasons. 1) It’s what I read the most. 2) I think those readers are in a very transformative time of life, which I remember vividly from my own growing up. I want to reach in to that confusing time of life and help bring clarity and hope. 3) Um…it’s clearly the funnest genre. Just sayin’.

I tend to connect mostly to dystopian and fantasy. Science fiction gets a bit too techy for my brain. 😛

You’re experiencing the dreaded writer’s block *gasps* and need inspiration to keep going. You go/do…
I’ve yet to really have writer’s block. *knock on wood* BUT…when I have a tough time hashing out a scene, I’ll usually go take a walk, try to find a new adventure, and live life a bit. Life inspires me the most. That and the LOTR extended edition movie trilogy. [grin]

Of all of the characters you have written, which is your favorite and can you give me three key words to describe him or her?
Parvin is my favorite. I’d describe her with these words: Impulsive. Passionate. Searching.

Favorite place/environment to write?
Near a window…preferably in a chic old-townish coffee shop.

Plotter or pantser?
Mostly pantser, but I tend to have a rough plot in my head of where the whole thing is going.

Let’s say I give you an airplane ticket to any fantasyland from books/film. You would go to…
HOGWARTS! Sorry, but I wasn’t meant to be a muggle. I’d go there with a snap of my fingers, even if I had to be a Squib. (Literally, my favorite answer of Nadine’s!!! Muggles gonna hate…)

We’ve all experienced it—that incredibly disappointing book ending/series finale that spoils a brilliant trilogy (for me: Requiem by Lauren Oliver, Sever by Lauren DeStefano—blek!). Name one of the worst endings to a series or stand-alone that sticks out to you and why. I know, sorry to dredge up painful memories, but the people need to know!
Mockingjay. Still bitter. Still angry. Still throw the book against the wall every time. Not just because of the “last line ending” or anything, but because of the digression of Katniss’s entire character, the depressing plot…just…. *hides under soapbox*

What is the biggest draw to you as a reader picking up a new series (cover, blurb, relatable characters, plot)? Does being an author give you a bigger appreciation for other works?
The cover and title usually catch me. And then if the blurb shows an awesome storyworld I’m usually hooked – flat characters or not. And yes, being an author gives me a much bigger appreciation for other works! I frequently find myself moaning, “Why can’t I write like this?!” In a backwards way, it’s inspiring.

Thanks so much for stopping by, Nadine! And be sure to add “A Time to Speak” on Goodreads, check out “A Time to Die,” and follow this soon to be best-seller wherever she goes. Trust me on this, guys! I’m a professional reader. 😉

And again, just because I love it so much!

Back Cover Blurb for “A Time to Speak”:

How do you live after you planned to die?

Parvin Blackwater should have died in her brother’s place. She didn’t. Now she’s the only one who can protect her village, but no one wants to listen. When the Council starts forcing “new and improved” Clocks on the public, those who refuse are declared Radicals and exiled.

Having been across the Wall once, Parvin is the only one who can save them. But instead of going through the Wall, she’s packed into a boxcar, loaded on a cargo ship, and forced out to sea.  How will she lead when facing the unknown?

Worse yet, why are people suddenly dying before their Clocks have zeroed-out?

Nadine Brandes is an adventurer, fusing authentic faith with bold imagination. Her dystopian trilogy, the Out of Time Series, challenged her to pursue shalom, which is now her favorite word (followed closely by ‘bumbershoot’.) When Nadine’s not taste-testing a new chai, editing fantasy novels, or being a Harry Potter super-nerd, she and her knight-in-shining armor (nickname: “hubby”) are out chasing adventures.