When NaNo arrives, even your leisure time needs to foster your creativity because, really, there isn’t such a thing as “free time” during the month of November for writers. Free time? *pauses at keyboard to cackle hysterically and then hurries to catch up with word count* It’s important to remain focused when you’re trying to nail that word count or make up for lost time. But when your brain feels like Jabba the Hut (a big blob of garbled noise), it’s time to take a mental break before you burn yourself out and can’t make sense of anything.

So how do you avoid brain mush while not totally losing your writing mindset? Aside from taking a walk or closing my eyes while listening to my writing playlist, one of my favorite ways to decompress during NaNo is to watch a film about writing. I can take a couple hours, have some popcorn or a cup of tea to refuel (no, coffee and I aren’t exclusive . . . not entirely), and let my mind relax while I absorb the stories of other writers. I have a few favorites that always do the trick, and if you’re ready for a mental break (or even have the time to read this post), give one or all of these a try and let me know what you think.

P.S. They also go really well with a cup of coffee during the other eleven months too. ^_~ 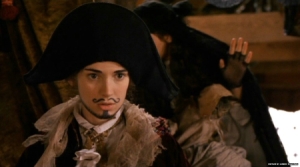 Come on. Who didn’t want to be Joe March growing up? Clever, independent, creative, and an incredibly loyal sister. Growing up in a house with three sisters, I always felt that I could relate to Joe’s quirky ways, overly dramatic exclamations, positive outlook on life, and wandering mind that gets her into trouble. This movie is like comfort food for my writing soul! I’d also like to state for the record that I will always be #TeamTeddy. ^_~ 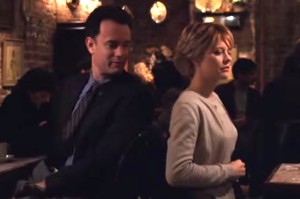 There’s just something about movies set in fall that make me happy and nostalgic, and this is one of my all-time favorite movies. The entire premise of the film is about preserving the past, creating a future, and centers around the rocky romance between two opposing bookstore owners (the pragmatic Tom Hanks, and the hopeless dreamer played by Meg Ryan). Plus, I visited a few spots from this film when I was in New York, and those are some of my favorite memories. 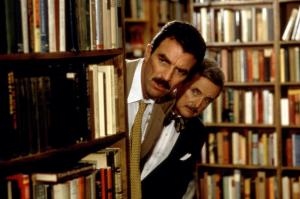 This has been one of my favorite movies for years. Not only is Tom Selleck young and hilarious, but he plays a mystery writer caught in a rut (#relatable?). The quirky fun starts when he becomes enchanted with a young Romanian woman he believes to be innocent of murder, and he gives her a false alibi and a home to stay in. Her alluring and often mysterious behavior ignites a spark in his writing, though he soon wonders if he let a murderess into his home. Selleck’s character lives vicariously through the super-suave Peter Swift in his stories, and the way the scenes in reality are (excitingly) portrayed by his ultra-cool voiceovers is ridiculously funny.

Not Another Happy Ending 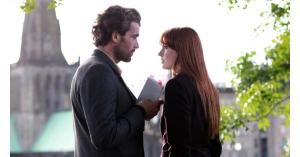 My sister DeAnna found this movie while scrolling through Netflix one day, started it up, and five minutes later told me I had to watch it. It’s a totally offbeat film about a Scottish writer (Karen Gillan) and her uber-handsome French publisher. When her life is going perfectly and her inspiration is no longer fed by real-life angst, she gets into a rut on the last chapter of her much-anticipated second novel. Her publisher realizes that the only way to get the ending from her is to, well, ruin her happiness. This movie will have writers and non-writers alike busting up from the pure, fluffy joy of it. 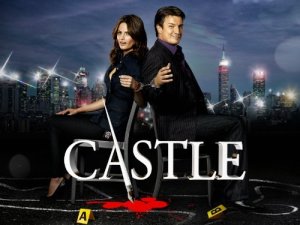 *whistles opening tune* If you haven’t heard of this show . . . I just don’t even know how to respond. It centers on the story of Richard Castle (Nathan Fillion from Firefly), a New York Time’s bestselling author who teams up with detective Kate Beckett (does anyone recognize Stana Katic from Quantom of Solace??!!!) to solve crime. One of my favorite crime-solving duos of all time, along with Sherlock & Watson from the movies and Elementary, and Shawn & Gus from Psych. The show packs fabulous mystery, hilarious moments, and some delicious writer touches that make it binge-worthy.

Other movies to look out for:

True Memoires of an International Assassin (a Netflix original)

Well, I guess now the choice is which one I’ll start with tonight!