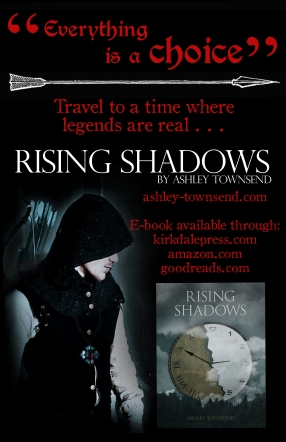 Sarah Matthews is nearing the end of another eventless summer in the small town of Bethany, Oklahoma, bringing her closer to the start of her freshman year of college. Disheartened over the reality that yet another unexciting season is coming to an end, Sarah wishes for an unforgettable adventure. When mysterious circumstances transport Sarah and her younger sister back in time, she gets more of an adventure than she could have ever imagined. The two sisters find themselves trapped in the twelfth century in a place shrouded with mystery and deception. Assassination plots, kidnappings, and tumultuous adventures force Sarah to rely on the Shadow, a masked hero who comes to her aid numerous times. In order to uncover a conspiracy and save those closest to her, Sarah requests help from the Shadow and also from Will, the handsome and equally intriguing blacksmith she befriends. Sarah is strangely drawn to the excitement that seems to follow the town hero and begins to look forward to their secret encounters. She also finds herself caught in a romance with Will, despite the fact that their equally fiery personalities have a tendency to clash as they attempt to work together. But Will’s past is filled with secrets and pains, and Sarah finds it difficult to break through the walls he has built around him. Can the faith and love of God that Sarah exhibits in her own life cause his hardened facade to fall away as he discovers that forgiveness and mercy are never too far from reach?